Berlin, 3 December 2013 – Transparency International's Corruption Perceptions Index 2013 offers a warning that the abuse of power, secret dealings and bribery continue to ravage societies around the world. 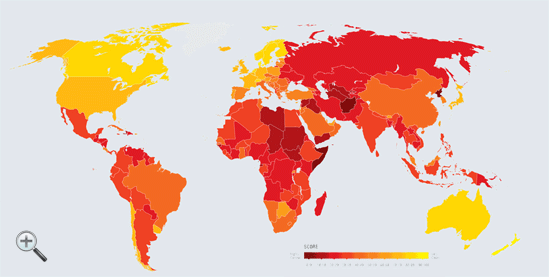 "The Corruption Perceptions Index 2013 demonstrates that all countries still face the threat of corruption at all levels of government, from the issuing of local permits to the enforcement of laws and regulations," said Huguette Labelle, Chair of Transparency International. 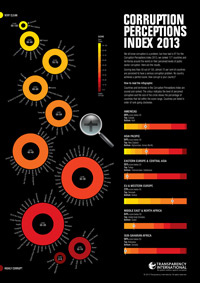 In the Corruption Perceptions Index 2013, Denmark and New Zealand tie for first place with scores of 91. Afghanistan, North Korea and Somalia this year make up the worst performers, scoring just 8 points each.

The Corruption Perceptions Index is based on experts' opinions of public sector corruption. Countries' scores can be helped by strong access to information systems and rules governing the behaviour of those in public positions, while a lack of accountability across the public sector coupled with ineffective public institutions hurts these perceptions.

Corruption within the public sector remains one of the world's biggest challenges, Transparency International said, particularly in areas such as political parties, police, and justice systems. Public institutions need to be more open about their work and officials must be more transparent in their decision-making. Corruption remains notoriously difficult to investigate and prosecute.

Future efforts to respond to climate change, economic crisis and extreme poverty will face a massive roadblock in the shape of corruption, Transparency International warned. International bodies like the G20 must crack down on money laundering, make corporations more transparent and pursue the return of stolen assets.

"It is time to stop those who get away with acts of corruption. The legal loopholes and lack of political will in government facilitate both domestic and cross-border corruption, and call for our intensified efforts to combat the impunity of the corrupt," said Labelle.

Transparency International is the global civil society organisation leading the fight against corruption.