Yerevan, 1 December 2011 - Corruption continues to plague too many countries around the world, according to Transparency International's 2011 Corruption Perceptions Index released today. It shows some governments failing to protect citizens from corruption, be it abuse of public resources, bribery or secretive decision-making. 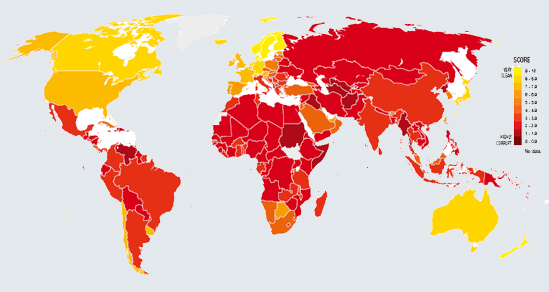 Transparency International warned that protests around the world, often fuelled by corruption and economic instability, clearly show citizens feel their leaders and public institutions are neither transparent nor accountable enough.

"This year we have seen corruption on protestors' banners be they rich or poor. Whether in a Europe hit by debt crisis or an Arab world starting a new political era, leaders must heed the demands for better government," said Huguette Labelle, Chair of Transparency International.

The index scores 183 countries and territories from 0 (highly corrupt) to 10 (very clean) based on perceived levels of public sector corruption. It uses data from 17 surveys that look at factors such as enforcement of anti-corruption laws, access to information and conflicts of interest. 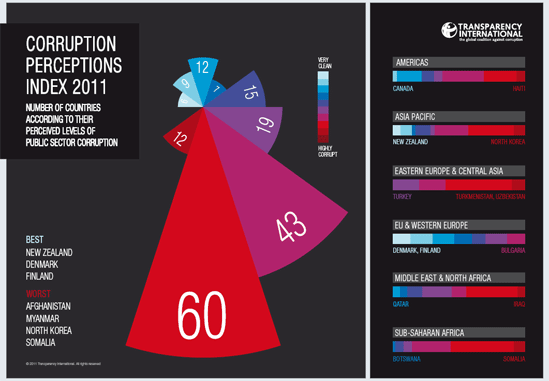 Two thirds of ranked countries score less than 5. New Zealand ranks first (with a score of 9.5), followed by Finland and Denmark (with scores of 9.4). Somalia and North Korea (included in the index for the first time), are last with scores of 1.0.

"2011 saw the movement for greater transparency take on irresistible momentum, as citizens around the world demand accountability from their governments. High-scoring countries show that over time efforts to improve transparency can, if sustained, be successful and benefit their people," said Transparency International Managing Director, Cobus de Swardt.

Most Arab Spring countries rank in the lower half of the index, scoring below 4. Before the Arab Spring, a Transparency International report (see here) on the region warned that nepotism, bribery and patronage were so deeply engrained in daily life that even existing anti-corruption laws had little impact.

Eurozone countries suffering debt crises, partly because of public authorities' failure to tackle the bribery and tax evasion that are key drivers of debt crisis, are among the lowest-scoring EU countries.

20 years after the collapse of the Soviet Union, except Baltic republics (singling out Estonia with its score (6.4) being the highest not only among the former Soviet republics (FSR), but also among all former Communist countries) and Georgia in recent years, all FSRs, including Armenia, are countries with systemic corruption . It comes to prove that massive systemic economic and political changes in 1990s unfortunately were not accompanied with corresponding institutional reforms.

This year CPI score for Armenia remained unchanged compared to the previous year. With its 2.6 score Armenia is sharing 129 -133 positions in CPI 2011 ranking with Dominican Republic, Honduras, Philippines and Syria (last year with the same - 2.6 score Armenia shared country rank between 123 and 126). Of all FSRs according to CPI 2011 only Georgia made progress compared with the last year , while the scores of other FSRs, as well as Turkey and Iran made no progress compared with the last year.