Governments should hear the global outcry against corruption

Yerevan, 5 December 2012 – A growing outcry over corrupt governments forced several leaders from office last year, but as the dust has cleared it has become apparent that the levels of bribery, abuse of power and secret dealings are still very high in many countries. Transparency International’s Corruption Perceptions Index 2012 shows corruption continues to ravage societies around the world. 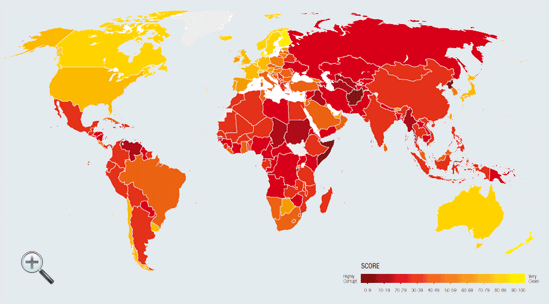 Two thirds of the 176 countries ranked in the 2012 index score below 50, on a scale from 0 (perceived to be highly corrupt) to 100 (perceived to be very clean), showing that public institutions need to be more transparent, and powerful officials more accountable.

"After a year of focus on corruption, we expect governments to take a tougher stance against the abuse of power. The Corruption Perceptions Index 2012 results demonstrate that societies continue to pay the high cost of corruption," Labelle said.

Many of the countries where citizens challenged their leaders to stop corruption –from the Middle East to Asia to Europe – have seen their positions in the index stagnate or worsen. 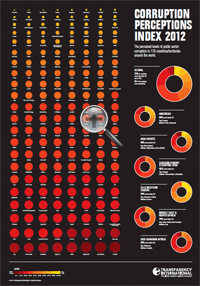 In the Corruption Perceptions Index 2012 Denmark, Finland and New Zealand tie for first place with scores of 90, helped by strong access to information systems and rules governing the behaviour of those in public positions.

Afghanistan, North Korea and Somalia once again cling to the bottom rung of the index. In these countries the lack of accountable leadership and effective public institutions underscore the need to take a much stronger stance against corruption.

Underperformers in the Corruption Perceptions Index 2012 also include the Eurozone countries most affected by the financial and economic crisis. Transparency International has consistently warned Europe to address corruption risks in the public sector to tackle the financial crisis, calling for strengthened efforts to corruption-proof public institutions.

"Corruption is the world’s most talked about problem," stated Cobus de Swardt, Managing Director of Transparency International. "The world’s leading economies should lead by example, making sure that their institutions are fully transparent and their leaders are held accountable. This is crucial since their institutions play a significant role in preventing corruption from flourishing globally," de Swardt said.

Among former Soviet republics Estonia continues to be distinguished with its rather high score: With its 2012 CPI score equal to 64 and 32nd place among 176 nations/territories included in 2012 CPI ranking list, it is not only the cleanest from corruption nation among former Soviet republics, but also among all post-Communist countries. Armenia’s 2012 CPI score is equal to 34 (with this score it shares 105-112 places) and besides three Baltic states, among former Soviet republics it also has lower score compared to Georgia and Moldova, whose CPI scores are equal to 52 and 36, respectively, and they share 51-52 and 94-101 places, respectively. As previously, among Armenia’s neighbors Turkey still is in a better position, than Armenia with its score equal to 49 and ranking 54-57. At the same time, Iran (CPI score – 28 and ranking 133-138) and Azerbaijan (CPI score – 27 and ranking 139-143) perform worse, than Armenia.