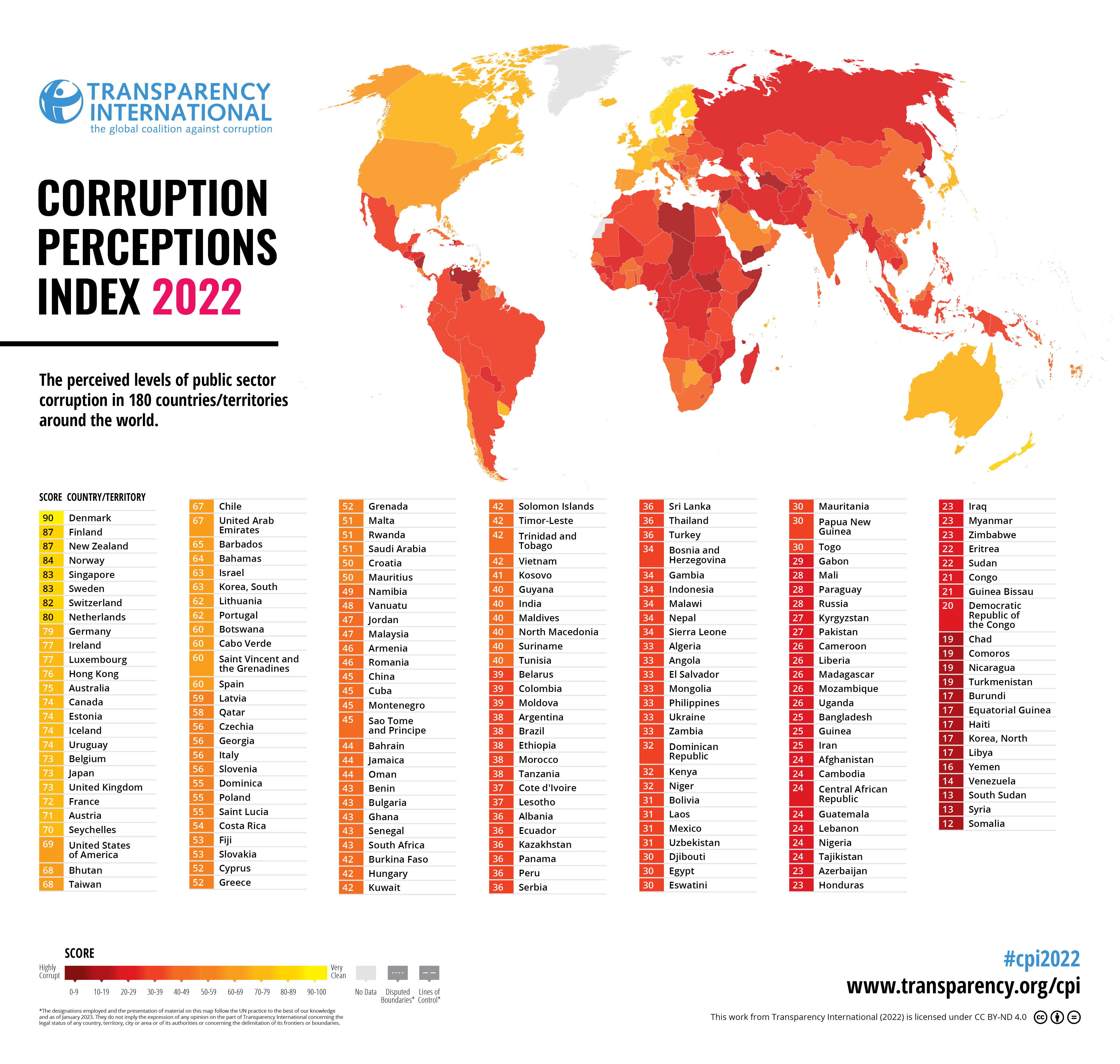 As Russia's invasion of Ukraine rocked the world in 2022, peace decreased in the Eurasian region more than any other according to the Global Peace Index. Across the region, high-level corruption provokes political instability, weakens institutions, strengthens organised crime and even incites such violent conflict.

"This year the international community saw the most violent result of unchecked corruption and kleptocracy. It's time for a wake-up call for Eastern European and Central Asian leaders to finally commit to addressing pervasive corruption and support democracy, stability and basic freedoms for all people across the region."

The CPI ranks 180 countries and territories by their perceived levels of public sector corruption on a scale of zero (highly corrupt) to 100 (very clean).

The Eastern Europe and Central Asia average showed decline this year, dropping one point to 35.

For each country's individual score and changes over time, as well as analysis for each region, see the region's 2022 CPI page.

Transparency International calls on governments to prioritise anti-corruption commitments, reinforcing checks and balances, upholding rights to information and limiting private influence to finally rid the world of corruption – and the violence it brings.

"The good news is that leaders can fight corruption and promote peace all at once. Governments must open up space to include the public in decision-making – from activists and business owners to marginalised communities and young people. In democratic societies, the people can raise their voices to help root out corruption and demand a safer world for us all."

The media page includes the CPI 2022 report, as well as the full dataset and methodology, international press release in English and Russian, and additional analysis for Eastern Europe and Central Asia. See here: https://www.transparency.org/en/cpi/2022/media-kit

About the Corruption Perceptions Index

Since its inception in 1995, the Corruption Perceptions Index has become the leading global indicator of public sector corruption. The Index scores 180 countries and territories around the world based on perceptions of public sector corruption, using data from 13 external sources, including the World Bank, World Economic Forum, private risk and consulting companies, think tanks and others. The scores reflect the views of experts and business people.

The process for calculating the CPI is regularly reviewed to make sure it is as robust and coherent as possible, most recently by the European Commission's Joint Research Centre in 2017. All the CPI scores since 2012 are comparable from one year to the next. For more information, see article: The ABCs of the CPI: How the Corruption Perceptions Index is calculated.