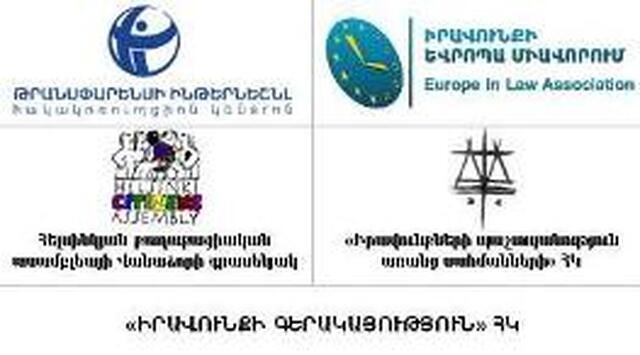 NGOs urge to make amendments to the Electoral Code

Free and fair elections are the keystone of any democracy, however in the perception of population as well as international organizations the Armenian authorities have recurrently failed to hold such elections. Lack of trust of people in the electoral system is reflected in the OSCE/ODIHR Election Observation Mission Report on Parliamentary Elections 2012. A recent Gallop poll revealed that only up to 13% of men and women trust in the honesty of elections that places Armenia as one of the three lowest ranking countries among 125.

Research and monitoring of a group of Armenian NGOs, including Transparency International Anti-corruption Center, Europe in Law Association, Protection of Rights without Borders, Helsinki Citizens' Assembly Vanadzor Office and Rule of Law, revealed that many problems related to the legitimacy and failure of holding free and fair elections are rooted in the Electoral Code. In November 2012, the mentioned NGOs submitted a proposal to the National Assembly to make amendments to the Electoral Code, however the proposed amendments were not duly taken into consideration. There was apparently no interest of the ruling party to change the controversial legal framework that is proved by the failure to follow recommendations of OSCE/ODIHR and the boycott of the National Assembly session to consider proposals of oppositional parties.

Justification of some officials on that international best experience does not encourage legal changes in the period immediately preceding elections was completely inappropriate given the current public frustration with the elections. Some of the proposed amendments would not distract the administration of elections, but would rather provide a chance to promote the expression of free will of citizens and restore the public trust in the electoral system. Meanwhile, in view of total public distrust and apathy as well as absence of serious political contest, the legitimacy of any person who comes to power in 2013 presidential elections will be called into question.

Considering that little time is left for addressing other issues, Armenian NGOs still urge to take measures at least to dispel suspicions regarding misuse of voter lists. On January 11, 2013 NGOs again appealed to the National Assembly factions and some MPs to demonstrate a political will and responsibility toward their voters and call for special session to make respective changes to the Electoral Code to publicize the signed voters' lists.