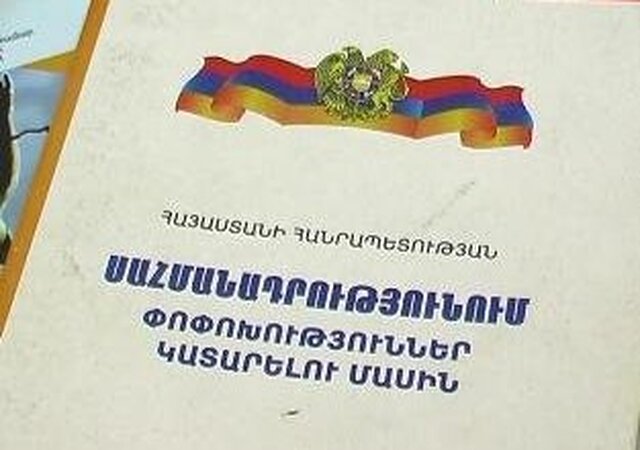 On September 4 2013, the President of Armenia Serj Sargsyan issued a decree to establish a Specialized Commission on Constitutional Reforms under the President’s office to draft amendments to the Armenian Constitution. This decision was the second in the chain of unexpected unilateral decisions started a day before, on September 3, 2013, with S.Sargsyan’s announcement to join the Customs Union. Before, there have not been any expert debates or public discussions in Armenia on the need for constitutional changes. Instead, legal experts and human rights groups continuously have raised the concern of poor enforcement and gross violations of the Constitution by the state authorities.

On April 10 2014, the Specialized Commission on Constitutional Reforms presented a Draft Concept Paper on the Constitutional Reforms of the Republic of Armenia, which proposed some changes related to human rights, local governance, judiciary, etc. Most importantly, the concept paper proposed a transitioning of the governance system from a semi-presidential to a parliamentary one, where the national elections will be held for the National Assembly only and the MPs will elect a president.

On September 11 2014, the Venice Commission of the Council of Europe issued an opinion on the mentioned concept paper. Along with analyzing and recommending to improve some of the proposed amendments, it stressed that the choice of the governance system in favor of a parliamentary one “also contain a political element and will have to be debated extensively in the country. In any case, a comprehensive constitutional reform can be carried out only on the basis of broad consensus within society.”[1] The need for a large consensus within society in respect of constitutional changes was also stressed by Anne Brasseur, President of the Parliamentary Assembly of the Council of Europe during her visit to Armenia on April 13-15 2015.[2]

In spite of the great controversy over the proposed constitutional amendments and lack of adequate justification of the urgency for modifying the founding document of the Republic of Armenia as well as the content of some major changes, the amendments are aggressively pushed forward.[3] On May 18-19 2015 some of the changes were discussed with members of the Venice Commission.[4] The date of the constitutional referendum is not set yet, but the process is apparently driven forward to meet the deadlines of the upcoming parliamentary elections of May 2017. Such rush of actions generates a wide belief within the society that constitutional amendments are initiated with one major purpose - reproduction of the political power of S.Sargsyan and/or the Republican Party of Armenia (RPA) led by him, as according to the existing Constitution the person may not run for the third term as the President of the state, while switch to the parliamentary system of governance will give S.Sargsyan an opportunity to reproduce and strengthen the rule of his political party.

As civil society organizations with comprehensive experience in electoral processes in Armenia, we are deeply concerned with the planned constitutional referendum, based on the following grounds:

A major mechanism of recent election falsifications is widely believed to be maneuvers with the lists of potential voters. These lists include the names of all citizens above age of 18, embracing those who live, study and work abroad, but have not given up their Armenian citizenship.[13] These citizens are not allowed to vote outside Armenia, while within the country there is no adequate control over the use of their names. There are serious concerns regarding abuse of names of absent citizens with an aim of manipulating results of elections. Such worries have been rooted in the statistics as well as observation stories. In particular, detected cases of organized distribution of multiple passports in some precincts at 2012 parliamentary elections have not been pursued adequately by law enforcement bodies.[14] At 2013 presidential elections, many of the communities where the incumbent received the majority of votes recorded extremely high percent of participation, often exceeding 80, 90 and 100 percent.[15] Observers were systematically denied the opportunity of verification of names and signatures of noticed multiple voters, whereas such voting was not prevented by respective electoral commissions and not pursued by higher administrative bodies, the administrative court or law enforcement bodies. These issues would be easily resolved through the publicity of voters’ lists after elections, however there has been strong resistance by the authorities to the proposals of civil society organizations[16] to publish the lists that substantiates doubts over the significance of lists and possible abuse of names of absent citizens.

The above-mentioned facts and the history of electoral violations and fraud related to every election and referendum in Armenia since 1995 allow us to question the legitimacy of the proposed referendum considering their irrelevance to the current political situation in the country and the artificial urgency with which they are being pushed forward.

We, the undersigned organizations of the Citizens Observer Initiative urge all international organizations having a stake in the democratic reforms in Armenia not to support the constitutional amendments. The founding document of the state shall not be changed by any government unless there is a favorable political environment and consensus of major political players and public on the need and necessity for changing the Constitution, established practice of free and fair elections and the general public trust in the initiators of such radical change and the referendum process itself.

“Citizen Observer Initiative”, established in March 2013, is a coalition of civil society organizations that includes Transparency International Anticorruption Center, Helsinki Citizens Assembly Vanadzor, Europe in Law Association and Journalists Club “Asparez”. Its members have many years of experience of monitoring national elections in Armenia as well as in other countries. The first two organizations are also members of the European Platform for Democratic Elections. Experience of the mentioned organization extends beyond the observation of elections, including comments to legal amendments, awareness raising of citizens on their rights, management of crowdsource reporting platforms, and pursuit of election violations in administrative, judicial and law enforcement bodies. Since May 2013 the coalition observes local government elections throughout Armenia.

[1] European Commission for Democracy through Law (Venice Commission), Opinion on the Draft Concept Paper on the Constitutional Reforms of the Republic of Armenia (Rome, 10-11 October 2014), http://www.venice.coe.int/webforms/documents/default.aspx?pdffile=CDL-AD%282014%29027-e

[3] Approximate date of the referendum as the end of 2015 was announced by Davit Harutyunyan, Minister – Chief of Staff of the Government and Member of the Specialized Commission on Constitutional Reforms in his interview to H3 TV Channel.

[13] According to Republic of Armenia National Statistical Service data, about 350,000 citizens have left the country since 2008 and not returned. See http://www.armstat.am/en/?nid=45&year=2014