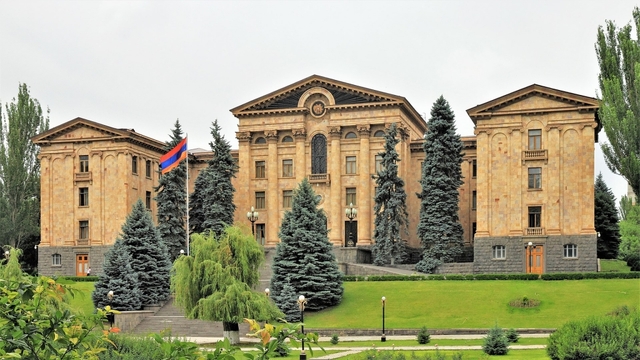 We denounce the violence in the Parliament

Prime Minister Pashinyan has repeatedly and clearly stated that violence has no place in our life. Today, however, after several attempts to interrupt MP Edmon Marukyan’s speech in Armenia’s Parliament, My Step faction MP Sassoon Mikayelyan exerted violence on Marukyan, after which an all-out brawl began on the Parliament floor. The culture of dignified and civilized parliamentarism, still in its making, thus suffered a heavy blow. The disgraceful traditions of the criminal parliamentary anticulture that had emerged during the period of state capture turned out not only to have not disappeared, but also to be lingering.

It is with regret that we note that, had the new Parliament had the courage to make a political assessment of the disgraceful past record of state governance, this incident exemplifying the criminal anticulture would perhaps not have occurred today.

Categorically denouncing violence altogether and any manifestation thereof in social relationships and in the government system, we demand that National Assembly leadership make an effort to completely rule out from the parliamentary process any violence or other unethical behavior that is ill-suited for a democracy conforming to the values of the rule of law, and to work rigorously towards eliminating the violence culture from public life. We deem the parliamentary majority to be primarily responsible for what happened, having received from the public and currently enjoying a sufficient and legitimate mandate to root out the violence culture.

Armenia must once and forever put an end to the faulty practice of resorting to violence as a means of dealing with differences. The harshest sanctions must be prescribed for hooliganic and violent responses to what may be even the most acute criticism.

Each and every member of the National Assembly elected via free and fair elections must prove with his or her everyday behavior, demeanor, and speech that they deserve to represent Armenia’s citizens—the very citizens that carried out a velvet revolution through exceptionally non-violence mass protests of civil disobedience and demonstrated their ability to resolve any issue without resorting to violence.

No one shall be privileged in the Republic of Armenia.

The following must be completely rooted out from the floor of the state’s highest political body—the National Assembly, and from the vocabulary of the politicians: anyone who directly or indirectly uses, or offers innuendo related to, words such as dumb, scoundrel, political rag, I will slit your throat, bastard, upstart, weary, dog-like, bashi-bazouk, psycho, I will crack you open, or any other words or language containing other personal insults or threats targeting anyone whatsoever; anyone who provokes, encourages, or engages in fist fighting on the floor; any labeling or name-calling or vulgarity and obscenity, bluster, and violence.

The country’s top podium must serve as nothing but an example of civilized political and ideological debate.

We demand from the Parliament that received an exceptional vote of confidence from the Armenia people, and especially from the parliamentary majority, to be accountable for their undertakings to the people, to not replicate the cynical style and empty substance of the forces that had captured the state and were removed from government through the velvet revolution, and to exert all efforts to solve the systemic problems for Armenia to become a civilized and democratic state governed by the rule of law.

Others are free to join this statement.